ABLE Accounts to Open This Summer in Torrance, CA 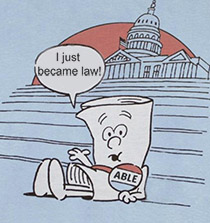 Almost two years after federal legislation was passed to make it easier for people with a disability to save money without losing federal benefits, the first programs that enables people to take advantage of the law are about to go into effect.

As every family with a child of special needs knows it can be very difficult for a person with disabilities to open up an account to save money and not make himself or herself ineligible for benefits. In an effort to make it easier Congress passed the Achieving a Better Life Experience Act (ABLE) in 2014.

The Act allows people with a disability to put up to $100,000 in state based accounts without losing Social Security benefits. An unlimited amount may be put into the accounts without fear of losing Medicaid benefits.

So far no one has been able to take advantage of the Act because it requires states to pass laws and regulations to oversee the programs.

Disability Scoop reports in "First ABLE Accounts Expected This Summer" that Nebraska has announced that its program will begin on June 30, 2016. Ohio has not announced a launch date, but it might begin its program even sooner. Florida and Virginia are also expected to open their programs this year.

In good news for all people with a disability, Ohio, Nebraska and Virginia are not limiting their programs to state residents. Anyone in the country can enroll.

As the programs are expected to vary between states, people might want to go ahead and enroll in one of those three states. The accounts can later be rolled over to another state if a better program opens up.

An estate planning attorney should be consulted for advice on dealing with potential restrictions on ABLE accounts and the possible use of a special needs trust.