Beneficiary Designations and Your Estate Plan

“A well-executed estate plan is a thing of beauty – but make sure you aren’t neglecting some of the equally important parts of the process.” 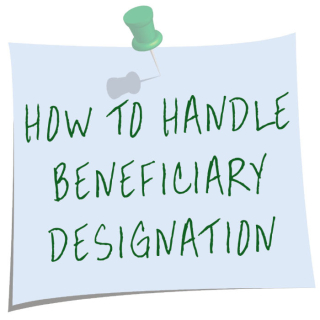 Most people don’t realize that the beneficiary designations they sign when opening an IRA, an investment account or purchasing a life insurance policy or any other account will supersede their will. Not realizing this can do more than interfere with even the best estate plan — it can completely override your wishes for asset distribution. This is an important detail, advises Daily Times in the article “Senior Life: Costly Estate Planning Mistakes—Don’t forget about those beneficiary designations.”

Here’s an example: Carol’s partner Roger, with whom she had lived for more than two decades, passes away. They had never married. Roger had been estranged from his daughter from a previous marriage and hadn’t spoken to her in more than two decades. Roger had made a will that specifically left everything to Susan and specifically disinherited his daughter.

When Carol contacted Roger’s employer to find out about his retirement plan, she was stunned to learn that he had never changed his named beneficiary. His daughter was the beneficiary and she would receive his entire IRA. The company representative could not even discuss the matter with Carol, because she was not the beneficiary. The couple had planned on Carol having that money to help after he passed, but the beneficiary designation was not changed.

Later, while cleaning out Roger’s files, Carol found the forms to change the beneficiary designation — but they had never been mailed.

Roger owned some property, so the will had to be brought to the Register of Wills office to register it for probate. This is the process where the executor obtains court approval to act on behalf of the deceased person. Problem number two: Roger had downloaded a will from the Internet, and it had not been properly signed or executed. Since it was not properly signed, the estate planning attorney who was helping Carol had to locate the notary and the witnesses. This was starting to get expensive, and it was taking much longer than it would have, if a proper will had been drafted.

The tag dealer, whose employee had notarized the will, said that the person was no longer employed at the company and no one knew where he was. The witnesses were unavailable. The probate process became even more troublesome.

Things only got worse from there. The will that Roger had downloaded from the Internet also included “default inheritance clause,” which meant that the estate was obligated to pay taxes on the money that was left to Roger’s daughter. This meant even less money for Carol. Not only does Roger’s estranged daughter get the money, but Susan has to pay the taxes out of her share.

A will is too important to be left to chance and hope that an online document is correct. Wills need to be created and executed with the utmost care. Roger thought he was saving himself some money, but the expense and stress he caused for Carol was a financial and emotional disaster. A competent estate planning attorney would have asked about beneficiary designations, reviewed all of Roger’s assets and asked the right questions about his daughter and what he wanted to do.

Beneficiary designations are as important as a will, and need to be reviewed from time to time, just as will and an estate plan must be reviewed. As lives change, estate planning documents need to change with them.