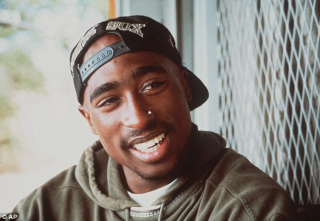 If you would like to purchase a pendant that Tupac Shakur was wearing when he was shot, you can. You might get sued though.

The deceased rapper Tupac Shakur remains one of the biggest stars of the music genre years after his death. Fans still cannot get enough of his music, but his personal items have not been nearly as accessible to interested collectors.

A single piece of memorabilia has now appeared.

According to TMZ in "Tupac Bullet-Dented Pendant. . . Up For Grabs For $125K," a bullet-dented pendant the rapper was wearing when he was shot in New York City two years before his death is up for sale at a fixed price of $125,000

The pendant was allegedly given to a memorabilia dealer for the sale by an unnamed family member. It is not certain why it is a sale for a fixed price when most high value celebrity memorabilia is put up for auction.

What does seem clear is that this sale is very much a buyer beware situation.

Tupac's estate has declared that no one, including family, has been authorized to sell any merchandise. The estate has threatened to sue anyone who sells or buys the pendant.

Until more details come out, it cannot be determined whether the estate has the right to block the sale of this pendant.

Holding an estate sale for a loved one's possessions can be an emotional experience.

It is not unusual for people who inherit another person's estate not to want all of the stuff the deceased collected over the course of a life time. They might not even have room to store all of the stuff. A lot of today's heirs already have a full house of their own stuff.

In these cases one of the best courses of action is to hold an estate sale, but it can be emotionally trying to sell off a loved one's possessions.

Recently, WCPO Cincinnati offered some advice in handling an estate sale in "4 tips for dealing with the emotional side of estate sale planning."

To make matters easier on yourself, contact a qualified estate planning attorney to help.

Reference: WCPO Cincinnati (May 9, 2016) "4 tips for dealing with the emotional side of estate sale planning